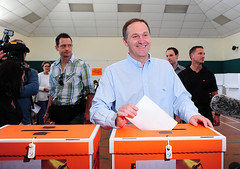 The intention is currently only in early planning stages, though John Key has said that “we are keen to take the next step.” If current projections prove to be correct, the institution of such a financial center could create 3000 to 5000 middle and back office administration jobs. The fund administrators would also be subjected to taxation in New Zealand. As under the scheme New Zealand would only provide administrative support, the pension funds themselves would not be subjected to taxes within the country. According to the Capital Markets Taskforce’s report several “technical” changes would need to be carried out in New Zealand in order to facilitate the financial hub scheme.

According to John Key, a similar system has been implemented in Ireland with success. He described it as “cost effective, but also predictable.” Australia is investigating similar options, though the Prime Minister said that this is not worrying, as New Zealand is a more attractive destination and Australia would be more focused on attracting the funds themselves as to opposed to their administration duties.