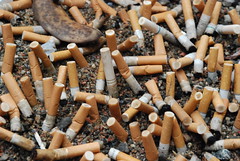 New research indicates that the recent tax rate rise on tobacco products has greatly increased the number of New Zealanders who are trying to quit smoking.

The number of New Zealanders attempting to quit smoking has risen 93 percent since the April tobacco tax rate increase. This assessment was released on November 17th in new research published by The Quit Group. Paula Snowden, Chief Executive of the Group, commented on the findings, saying, “The majority of smokers wish they had never begun smoking and our survey shows that an increase in tobacco prices provides the trigger some smokers need to begin their quitting journey.”

In the month following the latest tobacco tax increase 4 000 New Zealanders registered with Quitline, a telephone service designed to aid individuals in their attempts to quit smoking. According to the report, the number of callers was almost double that of the same period in 2009. Over 25 percent of those calling claimed that they had never attempted to quit smoking within the previous 12 months, and over 66 percent cited the tax increase as one of the reasons they decided to quit.

Paula Snowden praised the development, and the Government’s upcoming supplementary tax rate increases, but claimed that there were still more work to be done. She urged the Government to accept a proposal mandating the use of plain packaging on all tobacco products and banning the display of any tobacco products.