NZ to Cut Spending and Borrowing 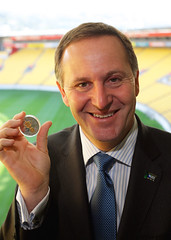 The Prime Minister has given a speech revealing the government’s focus for the upcoming budget, which will have a large emphasis on reducing government borrowing and working towards a budgetary surplus.

On February 9th Prime Minister John Key gave his Statement to Parliament 2011, the first speech given by the Prime Minister to the Parliament for the 2011 year. In the speech John Key revealed that the upcoming national budget will be released on May 19th.

The Prime Minister stated that in the coming year, the government will focus on reducing government spending, increasing the level of national savings and reducing the country’s reliability on overseas debt. He stated that the government will reduce its borrowing below previously forecasted levels. In addition, the new budget will have a reduced level of new spending, at an estimated level of NZD 800 million, compared to NZD 1.1 million in National’s previous budget. The new expenditures that will be allowed within the budget will be prioritized to health services, education, and economic growth opportunities. Residual funds will also be allocated to improvements in the national broadband infrastructure. Under the revised spending projections, as will be outlined fully in the budget, the government should experience a budgetary surplus no later than 2014.

According to John Key, the New Zealand public sector will experience heavy slashes in funding. He said that the government will reduce the number of its full-time equivalent staff. Further, departmental ministers will be required to review their own budgets in order to reduce spending. The Prime Minister added that alongside the budgetary reevaluation, Ministers will also be asked to review their own operations and examine possible ways to overhaul their operations to better meet future challenges. He specifically pointed to a recent Defense Ministry white paper which recommended that greater funds be transferred away from back-office work in favor of front-line security, to better meet international military standards in the coming 20 years.

The new budget will also outline several mergers between government departments. It was hinted on the day that the Ministry of Agriculture and Forestry and the Ministry of Fisheries will be combined into one after the budget announcement. Explaining the number of public services currently running in New Zealand, John Key said, “…the Government machine still consists of more than 80 Crown Entities each with their own Board, 38 Departments, more than 70 portfolios and more than 60 separate Budget Votes. The costs of running this machinery are still too high.” He went on to say “… clearly, there is more to be done to make the government bureaucracy smaller and better.”