New Spending to be Cut from Budget 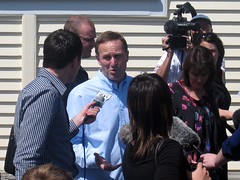 New Zealand is set for a period of austerity and budget cuts, as the government faces the economic realities and repercussions of February’s earthquake in Christchurch.

In a television interview conducted on March 20th, the New Zealand Prime Minister John Key discussed the recent earthquake in Christchurch, and the economic implication that it imposes on the country. He revealed that the new budget would see significant cut backs to the NZD 800 million of new government spending, along with an approximate NZD 5 billion of extra borrowing.

The Prime Minister said that the health and education sector will receive new funding, but this will be sourced mainly from cutbacks in other sectors. When questioned on the extent of spending reductions he said, “…that may well be in the order of $600m, 700m, 800m.” He continued to say that the government’s options were very limited, with the only options being new taxes, new borrowing, or budget cuts. The first two would prove to be impractical, and even damaging, in the long run.

It was no revealed which government departments and services would see budgetary restrictions. Ministers are now expected to reevaluate their budgets and present potential cut backs to the government, and decisions will be made based on the findings.
The government is currently projecting that an extra NZD 5 billion worth of borrowing will be required this year, in order to cover the government’s share for rebuilding of Christchurch. The prime Minister also added that New Zealand is likely to see a further economic slowdown due to the recent Japanese earthquake, with the disaster struck country currently being our fourth largest trading partner.