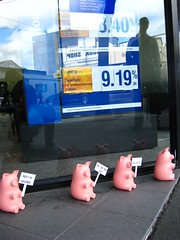 The Reserve Bank of New Zealand has taken proactively cut the national interest rate, in an effort to aid the recovery from the Christchurch earthquake.

On March 10th the Reserve Bank of New Zealand announced that the Official Cash Rate (OCR) is being dropped by 0.5 percent to a level of 2.5 percent. The adjustment comes as the first rate change after four separate OCR assessments.

Reserve Bank Governor Alan Bollard attributed much of the rate cut decision to to the recent Christchurch earthquake, and the associated negative economic effects. He said that there has been a deep disruption to typical business activity, and at this stage there is little indicative information about how long the impact will last. Alan Bollard went on to say that even before the occurrence of the earthquake, a cut in the OCR was being considered. He said that GDP growth has been weaker than projected, with retail spending and residential investments levels both declining.

While speaking about the future OCR outlook the Governor said that the Reserve Bank has had to make this decision with limited economic information, and the effects of the change will be monitored closely to ascertain the best course of action.

Photo by Frédérique in NZ