OCR Unchanged Due to High Dollar 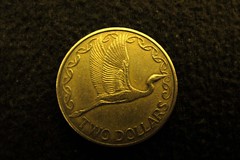 The New Zealand Official Cash Rate will remain unchanged, as the high Kiwi dollar and constrained domestic economic activity mean that an increase will only serve to hamper growth.

New Zealand is looking to be set on the road to financial recovery and sustained economic growth following the recent Christchurch earthquake, but the growth does not yet warrant an increase to the national Official Cash Rate (OCR). On June 9th the reserve bank of New Zealand announced the outcome of the latest OCR review, saying that the rate will remain unchanged, at the current rate of 2.5 percent.

During the OCR announcement Reserve Bank Governor Allan Bollard said that the outlook for New Zealand’s economy had “improved since the publication of the March Statement”, but economic indicators suggested that a further increase in production could still be expected over the next two years.

The Governor noted that the New Zealand dollar had appreciated significantly recently, and the movements were putting extra pressure on some sectors of the economy. He went on to say that the high level of the dollar is currently placing some constraints on necessary rebalances in the economy, meaning that any upward revisions to the OCR would need to be delayed until the dollar weakens.

The OCR is expected to be gradually increased over the next two years, as the New Zealand economy strengthens. However, the Reserve Bank will pace any raises to the speed of economic growth, so as not to cause any misbalance. Allan Bollard said that at the moment export earnings are being held back by the value of the dollar, and household expenditures are constrained, and any premature upward revisions of the OCR will only serve to further dampen both of these activities.