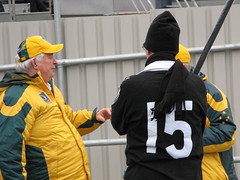 Throughout this week several comparisons have been made between the differences in prices available to consumers looking to purchase All Blacks memorabilia before the World Cup. Particular controversy was raised regarding the wide discrepancy in price between replica All Blacks jerseys available in New Zealand and those offered online by overseas companies.

Following the revelation over the prices, New Zealand Retailers Association chief executive John Albertson called for New Zealand taxes to be applied to online purchases of consumer items. He explained, saying “…if we are moving to a model of taxing consumption rather than income, then the Government should tax all consumption.” He added that applying taxes to online purchases would level the playing field for local retailers.

John Albertson said that the New Zealand Retailers Association was currently preparing a report on the potential tax revenues that could be raised by applying GST to online purchases. As a preliminary estimate, it was suggested that the country could see up to NZD 100 million extra in tax revenues per year if the measure were to be introduced.