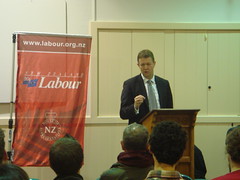 David Cunliffe reaffirmed New Zealand’s need for a capital gains tax, saying that New Zealand was one of only three OECD member states to not have the tax. The Minister explained that the new tax would encourage people to invest in productive assets and not just in property. Further, over half of the raised tax revenues would be used to fund tax measures aimed at boosting New Zealand’s economic welfare and productivity. David Cunliffe said that if the capital gains tax is approved, it would allow the government to instate a tax credit system for companies conducting research and development activities. Further, the Party would cut GST from fresh fruits and vegetables, and cut taxes on the first NZD 5000 of personal incomes.

Approximately 9 percent of the funds raised from the Capital gains tax would go directly to job creation. The remaining funds are all earmarked for repayment of government debts.