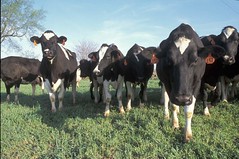 The wet weather seen across New Zealand this summer has proved to be a positive for local farmers, as the damp conditions boosts agricultural output to record high levels.

Over the last 12 month the export value from the country’s key agricultural export industries has grown by NZD 2.6 billion, according to new research conducted by the Federated Farmers and released on March 5th.

According to the president of Federated Farmers Bruce Wills the recent spout of bad weather has provided good conditions for agricultural production and quantities of export products. He said that the biggest growths were seen in the dairy, meat, wood, fruit, fish and wine industries, as they benefit the most from increased quantities of rain and grass growth.

Bruce Wills added that  in December 2011 10 percent more milk was being produced in New Zealand compared to the same month in the previous year. During December 2011 the wool and dairy industries were overall the fastest growing agricultural sector in New Zealand.

However, despite the positive situation at the moment, Bruce Wills explained that the outlook for future export in 2012 is not as optimistic, as the prices of New Zealand commodities are expected to ease as the year goes on.