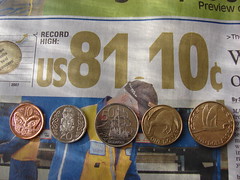 The Official Cash Rate in New Zealand will remain unchanged at 2.5 percent, as the economic conditions in the country and around the world do not yet warrant an increase to the rate.

While presenting the latest Monetary Policy Statement earlier today, March 8th, the Governor of the Reserve Bank of New Zealand Alan Bollard said that the bank has analyzed the outlook for national inflation levels and decided that the most economically prudent action at this point in time would be keep the OCR unchanged at the current rate of 2.5 percent.

Describing the current economic conditions in New Zealand, Alan Bollard said that the country is showing signs of improvement, but the main financial indicators have not yet grown enough to reach the level of stability which requires an increase to the OCR.

It is expected that economic activity will increase further during 2012 as more recovery efforts and rebuilding projects get underway in Christchurch.

Household spending is also showing signs of improvement, and is expected to pick up even further as the year goes on.

According to the Reserve Bank, on an international scale, continued policy actions by central banks around the globe are helping bring stability and economic confidence to the worldwide economy.

The value of the New Zealand dollar is helping to keep the national inflation at a steady level, but also has a detrimental effect on the country’s export sector.

In line with the Reserve Bank’s monetary policies, before the OCR can be raised, the value of the New Zealand dollar against other international currencies would first need to decrease.