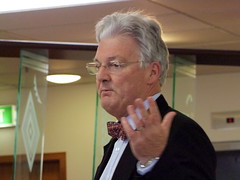 According to the Minister, due to the financial situation in Europe, New Zealand can no longer continue borrowing money to fund public spending, and this situation underlines the importance of having an efficient tax system in the country. He continued to say that “…by working through the tax system and steadily eliminating inconsistencies and inequities, we make the tax system fairer and along the way we also collect more of the revenue that should be gathered.”

The Minister said that the latest government budget brought in several changes, which will improve fairness in the tax system. As an example, he said that the previously available voluntary repayment bonus on student loans was removed as it was poorly targeted and did not speed up the repayment of student loans. He also pointed to the removal of tax credits for the active income for children, saying it was ineffective.

Talking about upcoming tax changes, the Minister said that a review was currently underway to ascertain the proper tax treatment of assets which were used both to generate income and for private use by individuals.

Further reviews are also being conducted on the taxation of “salary or wages traded off for a non-cash benefit which is not taxable under the current tax rules.” Commenting on the proposal, the Minister said “… I think that if the tax system is to be fair, then people on equivalent salary packages should be taxed equally, irrespective of how they are paid.”

The Minister also mentioned a new bill which is before the House at the moment which would require anyone filing a filing an individual tax return to also file returns for the previous four years in order to prevent “cherry picking individual years to file a return”.

Peter Dunne also made mention of the IRD’s current IT system, which is now deemed to be inadequate for the modern tax system, and is expected to undergo an upgrade in the near future.