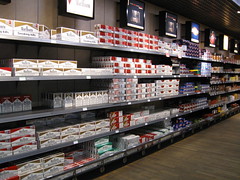 The participating health groups include the Royal Australasian College of Physicians, the Cardiac Society of Australia and New Zealand, the Heart Foundation, Maori Medical Practitioners Association, the College of Nurses and Auckland Regional Public Health Service.

The call to scrap the duty-free allowance follows shortly after a similar move in Australia which saw the limit on the number of cigarettes travelers could bring into Australia fall from 200 to 50.

Commenting on the proposal, the medical director of the Health Foundation Norman Sharpe said that duty-free cigarettes were often sold on the black market and led over NZD 63 million in losses of tax revenues. He went on to say that duty-free allowances on tobacco were effectively tax subsidies for “the tobacco industry and black market profiteers.”

In the recent budget the government proposed for taxes on tobacco to be raised by 10 percent per year over the next four years. However, the submission from the health groups called for the hike to be set at 40 percent in 2013, with a rise of 20 percent per year for the following three years. It is estimated that the increased hike would lead to an extra 100 000 current smokers giving up the habit.