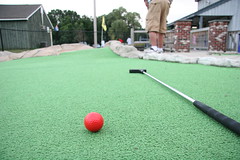 A Wellington based business owner has been sentenced to community detention for evading more than NZD 100 000 in PAYE payments.

On August 21st Carl Gifford escaped jail time but was sentenced to community service and community detention, after having plead guilty to allegations of tax evasion, mostly consisting of PAYE deductions.

Carl Gifford will serve 6 months community detention and 220 hours community work, and is also ordered to along well as being ordered to pay NZD 1 750 in court costs and NZD 7 000 in reparations. Carl Gifford also still owes to NZD 110 000 to the IRD in PAYE payments.

The judge presiding over the case acknowledged that Carl Gifford is self-employed and being sentenced to home detention will not allow him to provide for his family.

Carl Gifford’s businesses have been strugging financially in the past, and in 2012 his masonry business Stone Wall Limited went into voluntary receivership. Last month Carl Gifford revealed that his popular mini-putt golf course Carlucci Land was struggling financialy and “…everything here is for sale. I have debts and need to clear them.”
Photo by StarrGazr