Government Criticized on its Approach to Welfare 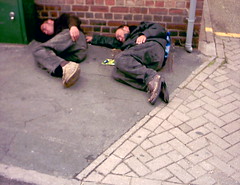 The government should concentrate on creating more jobs instead of reducing the number of people who are eligible to receive welfare payments.

The group Auckland Action Against Poverty (AAAP) has struck out against the government in a press release issued on September 12th, saying that the government’s “investment approach” to the treatment of beneficiaries and the welfare system does not help New Zealand.

The spokesperson AAAP Sarah Thompson said that the “…key focus of the investment approach is to remove as many people as possible from the benefit rolls through whatever means necessary.”

She said that this policy will force single parents and individuals with disabilities to leave welfare and look for jobs “…that just do not exist.”

Sarah Thompson said that the government’s recent analysis of welfare recipients does not show that the majority of individuals who receive the benefit will leave the system as soon as their health issues allow or as soon as they are able to find adequate childcare solutions.

It was suggested that if the government truly wants to alleviate the problem of welfare dependency, moves should be made to increase the number of jobs in the country and to remove “…the barriers to work for those with children or who are differently abled.”