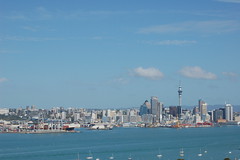 As the top ranked country in the report, New Zealand was placed above Denmark, Hong Kong and Singapore, which were 2nd, 3rd and 4th respectively.