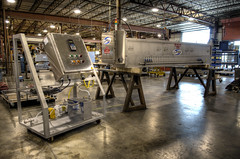 Calls have been raised for the government to help the national manufacturing sector through a series of new policies and tax changes.

On June 18th the leaders of the oppositions parties held a press conference in Christchurch to announce the release of a new report on the economic and taxation measures which could be implemented in New Zealand in order to boost the national manufacturing sector.

The report calls for the government to take extra steps to the reduce the volatility in the value of the New Zealand dollar, to implement taxation measures and economic incentives to encourage greater investment in businesses and not into housing, and to reintroduce tax credit for businesses involved in research and development activities.

More work also needs to be done to reduce the structural costs, such as the price of electricity, which are faced by businesses, and the government should implement policies which favor procurement of goods and items produced in New Zealand.

The Prime Minister John Key has already commented on the report, claiming that it contains suggestions and solutions to a problem which does not exist.

John Key said that it was a “joke” to claim that there was a such a significant crisis in the manufacturing sector, and that the whole report was a “stunt”.