The New Zealand government has once again seen a surplus, but drops in corporate income tax have left the surplus below expectations.

On June 3rd the New Zealand Treasury released the Financial Statements of the Government of New Zealand for the Ten Months Ended 30 April 2016 showing that the government has seen a positive operating balance before gains and losses (OBEGAL), although it was lower than forecast.

The government expected to see an OBEGAL surplus of NZD 1.234 billion, however, in reality it reached only NZD 297 million.

The below-expectation result was attributed to lower-than-anticipated Core Crown revenues, which were NZD 1.1 billion below forecast, reaching a total of NZD 56.7 billion.

The New Zealand government has seen an unexpected surplus due to a rise in tax collections.

Over the eight months ending February 29th the government saw a surplus of NZD 398 million, according to data in the new Financial Statements of the Government of New Zealand released on April 8th by the Treasury.

The improved overall performance was attributed to a higher-than-expected level of tax collections, with all major tax ending up at least 1 percent higher than predicted in the 2015 Half Year Economic and Fiscal Update.

The New Zealand government is in a better financial position than previously forecast, despite returning back to a deficit.

On November 6th the Treasury of New Zealand issued a new statement to announce that the government has returned to a budget deficit, although it is smaller than previously forecast.

The operating balance before gains and losses reached a deficit of NZD 545 million for the three months ending 30 September 2015.

However, the deficit is still NZD 253 million lower than expected for the period.

The better-than-forecast results were attributed to “…higher tax receipts as well as lower operating and capital payments than forecast.”

It was also stated that the results can be partially attributed to a drop in the outstanding liabilities by the ACC. 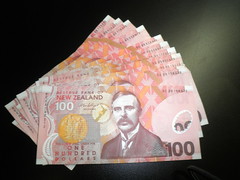 Disappointing tax collections over the last three months have brought the government further away from its goal of reaching a budget surplus.

On November 7th the Treasury of New Zealand released the Tax Outrun Data report for the September quarter, showing that total unconsolidated tax revenues for the period were 1.1 percent below the government’s forecasts, but approximately 5.6 percent above the same time last year.

The collection of GST was also below the government’s expectation, falling approxim...