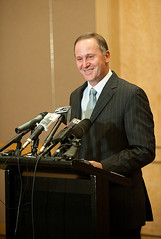 The Inland Revenue Department (IRD) has won its tax evasion case against Westpac Banking Corp, resulting in a NZ$918 million fine for the bank.

The New Zealand High Court made a decision to dismiss Westpac’s challenge to IRD’s decision that the bank owes $586 million in taxes for a series of structured finance transactions. The IRD claimed that between 1998 and 2002 the bank undertook a series of offshore transactions whose sole purpose was tax evasion. The court proceedings centered around nine such transactions, ranging between $390 million to $1.5 billion. Westpac has stated they may appeal the decision upon review of the judgment.

Westpac is currently liable for $918 million, $332 million of which consists of interest charged by the IRD on taxes unpaid...

Prompted by an influx of donations for the Samoa tsunami relief, the IRD has reiterated their policy regarding donations.

Further, it was emphasized that there is no longer an upper limit on the amount that can be claimed back from a tax donation. As long as the donation is lower than the individual’s annual taxable income and above $5, they would be able to claim a third of the amount donated, if receipts are kept.

The complete list of refundable charities can be attained from the I...