The government is cracking down on property speculation by foreign investors by proposing a withholding tax on such sales.

Under the proposed rules, foreign sellers will face a withholding tax when selling property, with a portion of the sale proceeds to be held by a lawyer, or conveyance agent, to be remitted to the IRD.

Some concession will be made if losses are incurred by the seller due to improvements made to the home.

The proposed withholding tax is ... 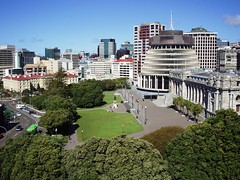 The signing of a new Double Taxation Agreement (DTA) between Australia and New Zealand has taken place.

On the 29th of June New Zealand Trade Minister Tim Groser signed the new agreement on behalf of New Zealand in a Paris based ceremony. There is no date set yet to its enforcement as in it needs to be legally enacted in both countries. In New Zealand this will happen by the Order of the Council, which is expected to occur later in 2009.

The key changes in the new DTA, according to Tim Groser, are lower withholding taxes on dividend and royalty payments between Australia and New Zealand, changes to pension payments, and overall reduced compliance costs.

In the new DTA the standard withholding tax rate on dividends will be 15%, but, 5% for an investing company has at least a 10% shareholdi...