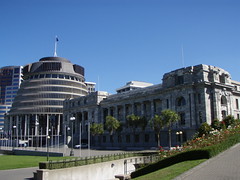 Tax Revenues to Drop After Quake

More than a week after the Christchurch earthquake, estimates are beginning to trickle in regarding the financial impact that the disaster will have on New Zealand as a whole. Initial forecasts indicate that the government will be at a loss of at least NZD 5 billion in 2011 alone, with extra expenditures across the country.

According to New Zealand Treasury forecasts, the direct costs with rebuilding the city of Christchurch will be as high as NZD 20 billion, in 2011 alone. After initial Earthquake Commission and insurance payments are made, the government is still expected to payout an extra NZD 5 billion. The Treasury has noted that the cost estimates are still not finalized, and could be revised upwards depending on more comprehensive damage estimates.

The Treasury estimates that under ...

The New Zealand Government is attempting to provide fairer access to social assistance for all New Zealanders, and has released a new paper discussing the issue.

In a statement made on August 30th Peter Dunne, Revenue Minister of New Zealand, said that there are currently several inconsistencies and issues within the national social assistance system. According to the Minister, some individuals are able to restructure their financial affairs, in order to unfairly receive monetary assistance from the Government, like Working for Families, student allowances and community services cards.

Peter Dunne announced that the Government has released Social Assistance Integrity: Defining Family Income, a public issues paper which seeks feedback on the potential solution to the perceived unfairness...

A new report has been released proposing a raft of changes to the New Zealand tax system, suggesting heavy cuts to many forms of taxation, and significant decreases to Government spending. The report is accompanied by a national survey profiling New Zealander’s acceptance of possible changes to taxation.

On May 10th the Maxim Institute released Lifting the Bucket: Tax policy and economic growth, a report detailing the Institute’s proposed changes to the New Zealand economy. The report was accompanied by the results of a survey profiling national tax payer’s opinions regarding taxation levels and Government spending on public projects...